Advertising claims to the contrary notwithstanding, it is not VRML (i.e., Black Sun and its rivals), but rather Activeworlds which is the only really operative 3d-chat system - with many universes, many hundred worlds, builder communities, a large number of newsgroups worldwide, and also some webrings. Following are some answers to frequently asked question about Activeworlds and the RWX-format and also some addresses. 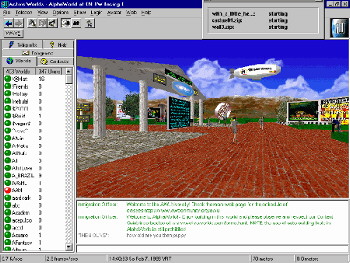 Rwx, or Criterion Renderware, is a 3d-Format by the company Citerion. Activeworlds is a 3d-chat-system by the company Activeworlds.com. This company sells and carries special servers which establish a 3d-environment for RWX objects. The uniserver-software manages a number of worlds. A worldserver manages the environment of a single world.

One advantage of the Activeworlds environment is that you don't have to load the whole world-file at once, as you do in VRML. The browser reads the world file and loads only the objects and avatars in your environment. Thus, worlds of thousands of square kilometers are possible, such as the Alpha-world of the Activeworlds mainserver. And in these worlds, you can not only chat with other users from around the world; every user can also build, using the RWX-objects, which are available for each virtual environment, according to need.

So far, the Activeworlds-browser is a stand-alone system, and is not included as a plug-in in conventional web-browsers. The browsers of now 17 existing uniservers have nearly the same software, but it is necessary to install them in different directories with different access paths. In all existing universes, you can load the software, chat, and look around as a tourist without paying. But registering and extended rights are possible for free only in some worlds, for exemple the City4all-Universe. In the main Activeworlds universe, registration costs now even $10 per month.

In each of these universes, you can even buy your own worlds. This gives you new and different possibilities. You can use your own RWX objects in your world, make your own horizont and ground, and you can open or close it to the public and only let in your friends. You can allow everybody, or some people, or nobody to build in your world. You are God in your world. For this, you first need a license for your world. In the main Activeworlds universe, this costs between $23 and $450 per year for the different sizes. Then you need a worldserver, which costs $67 per year. Finally, you need a provider, which hosts this server program. But you can also run it from your computer. However, your world is only present worldwide when you are online.

You can find more information on the homepages of the different universes:

There you can find also the respective newsgroups and community sites.

But back to the RWX-format. It is for Active Worlds purposes an ASCII-format . For easy transfer in the net, Activeworlds software had former a limit of 64 vertices. This limit is now no more existing, but the more points your object have, the more sinks the performance or becomes unpredictable. The skill of object-making is also to make good-looking objects with a low number of vertices. At the moment, there is not any really good object-editor for RWX. Therefore, most object-makers work with 3d-Studio, 3d-Max or Lightwave. Unfortunately, the present converters to RWX are very buggy. Therefore, some purists believe that it is better to work with graph paper and Textpad. But the 3d-possibilities of Excel also are interesting for some people. Eep's Creating RenderWare Objects For Use In Active Worlds is a well-written, understandable site.